Tanisha Thomas is an original bad girl on Season 2. Tanisha is currently 36 years old and she resides in Brooklyn, New York.

Tanisha Thomas is the hilarious, larger-than-life Brooklynite who was first introduced to television audiences in 2008 as a cast member in Oxygen’s "Bad Girls Club." She quickly became the show’s number-one fan favorite and went on to host the show’s reunion specials as well as the dating competition show, "Love Games: Bad Girls Need Love Too," and also had her own solo docu-series, "Tanisha Gets Married." Most recently, Thomas appeared on Lifetime’s makeover show, "Girlfriend Intervention," where she drew upon her own life experiences as she worked with women who have fallen on hard times to give them the boost that they need to transform their lives for the better. In addition to hosting "Crazy Talk," Thomas is working on a cosmetics line, a plus size movement called "PLUSH," and anticipating the release of her first book, Diary of a F.A.T. Girl, a memoir chronicling the dramatic highs and lows of her journey from Brooklyn to Hollywood and her ongoing search for happiness.

Season 14: Back for More (reunion host) 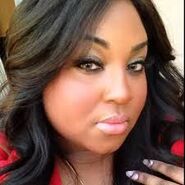 Tanisha and the Original Cast of season 2 of Bad Girls Club.
Community content is available under CC-BY-SA unless otherwise noted.
Advertisement