Throughout her life, Priscilla has always excelled at getting into trouble and, more importantly, getting out of trouble! From a scrappy tomboy to Homecoming princess, Priscilla uses her good looks and quick wit to get what she wants. Never one to bite her tongue, Priscilla speaks her mind no matter whom she hurts. Priscilla was unfortunately removed from the Bad Girl house after a physical altercation with Judi. 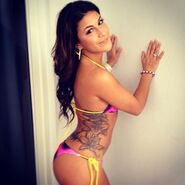