Paula Hellens (also known as Hell On Heels) is an original bad girl on Season 10. Paula is currently 33 years old and she resides in Chicago, Illinois.

Paula is a gutsy Southern city girl with a spitball mouth and feisty attitude. This petite bombshell attended Jackson State University where she not only became the first in her family to earn a college degree, but also developed a mean hair fetish. Paula currently works as a hairstylist and won’t hesitate to tell a random stranger their “Do” is whack. She admits she can’t control her words and is quick to take it to the next level. This hothead, hand clapping, neck rolling, party girl is ready for her next adventure.

This hotheaded, opinionated Bad Girl from Season 10 may only be 5-feet tall, but she’s packed with a punch. Paula has a degree in political science so she is often the voice of reason in the house, especially when her feisty attitude isn’t in charge.Ready to go the distance, Paula is fighting for the 100K so she can pay off her student loans and give back to her mom. 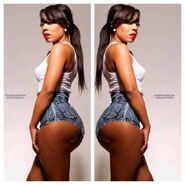