Judith Camille "Judi" Jackson (also known as The Voodoo Vixen) is an original bad girl on Season 7 and Season 13. Judi is currently 28 years old and resides in Atlanta, Georgia.

As an only child, Judi is used to being the center of attention and expects to be treated that way by many. An aspiring radio and TV personality, Judi is a college girl by day and a “Bad Girl” by night; hitting the clubs with a vengeance. Proud of being Creole, she was excited to represent her culture in New Orleans, granting her fans to become to know her as "The Voodoo 'Vixen' & later 'Queen'."

After the show she a small twitter beef with Priscilla but the two called a truce. In 2015 she began a twitter beef with former friend Erika then she also began beefing with her look a like Jasmine, Clerminah came to her defense. 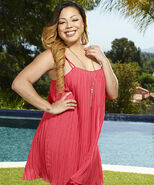