Danielle "Danni" Victor (also known as The Black Sheep) is an original bad girl on Season 8. Danni is currently 28 years old and she resides in Methuen, Massachusetts.

Danni is known as the evil twin. On All-Star Battle, she and her sister proved to be very strategic and made it in 3rd and 4th place. On Season 13, Danni showed a kinder and nicer side of her. She was arguably the most changed following Redemption.

Season Eight (by herself) 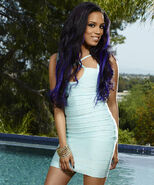